Marcus Thuram the son of Lilian Thuram has helped Borussia mönchengladbach to the lofty heights of 4th place. He was signed to replace the outgoing Thorgan Hazard and till now he has been successful in doing so. He has been an incredible addition to an already amazing frontline.

Gladbach bought him from Guingamp who were relegated from league 1 last season for a measly 8 million euros and it is fair to say that he has accomplished a lot this season playing under the wonderful coach- Marco Rose’s tutelage. He is a bit like Sadio Mane and Douglas Costa.

He has been uniquely used as wide forward by the former Salzburg coach.

In this scout report, we will be focusing on Thuram’s – positioning, technique, defensive contribution and his Physical and psychological profile. 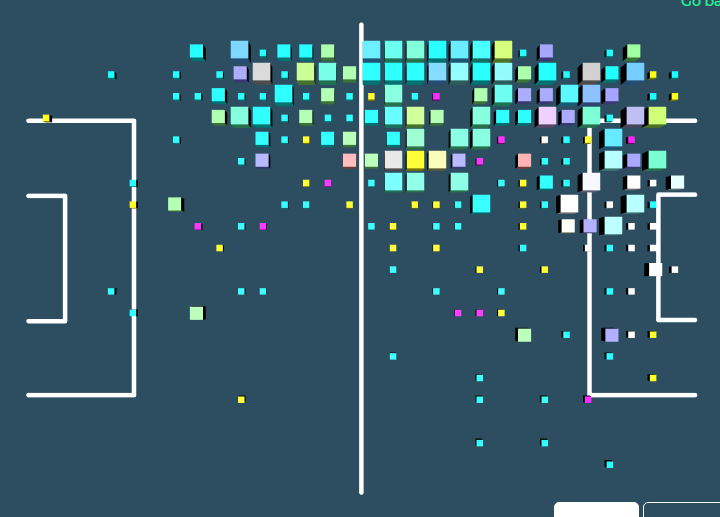 Key to the map above. (Map from- smarterscout-https://smarterscout.com/)

As this map suggests Thuram primarily he plays on the left-wing or as a wide forward in a 4-2-3-1,4-3-3 or 3-4-3 or 3-5-2. He sticks to the left either cuts inside when given the ball or passes to the left full-back with whom he has amazing chemistry.

He has some similarities to Ousmane Dembélé as they both are double footed and could both dribble anyone on their day. Also, like Dembele, he has amazing movement among channels, Gladbach uses both short passing game and long balls and the Sochaux academy product is useful in both as when receives a ground pass he looks to dribble past his opponent and when a long ball is played he runs at defenders.

This map might suggest that Thuram is only capable of playing on the left, but he can play on the right as well as the centre forward in certain systems.

Thuram’s an incredibly gifted technical player, his movement is outstanding and he seems to come across as a very intelligent player. Under the coaching of Marco Rose, he has played in multiple roles in an equally effective manner. When he plays off the left he seems to cut into his right and shoot or set up a goal for the other attacker. This has resulted in 6 goals and 8 assists with spectacular 0.7 xg+xa.

When he plays as a striker with Allison Plea he looks to run at defenders, him being a winger helps a lot because he finds spaces between defenders with ease. Like in the next image he times his run to perfection so that he beats the marker.

Thuram is one of the fastest players in the German top flight, his top speed of 34.5 km/hr is freighting for the defenders. This speed makes him a useful tool for counter-attacks. Like in the next image he covers more than half of the ground in 5 seconds and makes a very high goal-scoring opportunity which seemed almost impossible

The next image is the continuation of the above image

Thuram, as mentioned above, is a vital cog in Die Fohlen team. In possession, in order to control the game, he drops deep and forms a triangle with the full-back and nearest midfielder. Like in the next image.

In the above image, Thuram could dribble his way out of this press set out by Koln or he could pass it to the nearest midfielder and he would pass it to centre back and the centre back switches the play to the other side which will lead to a crossing opportunity and ultimately to a shot.

Thuram like the whole Gladbach team shoots only from inside the box and does not take bad shots, his shot map is a testament to that, this is why his 1.8 shots per game are better than someone who takes 3 shots but 1.5 out of the box.

Thuram is also very good in crossing situations where his tall physique come into play and this can be key to Rose’s tactics in some games.

Thuram’s speed is also necessary in the German coach’s pressing system where they try to win the ball as soon as they leave it and Rose, like most other modern coaches, considers his forwards to be the first defenders so they have to do a lot of defensives work. This is shown by Thuram’s defensive numbers in which he makes 1.4 tackles and interceptions per 90 which are not a lot but he also commits 1.8 fouls per 90 which is very helpful in breaking opposition’s attack. In this next image, Thuram along with 3 other teammates presses the Koln defenders such that they have to play the ball out of the play and Gladbach ultimately wins a throw-in to build up yet another attack.

One thing in which Thuram lacks as a player is passing, he mostly receives the ball in the final third and looks to dribble which has made his dribble numbers of 2.3 look good, but his involvement in certain games can be very less which makes up his measly pass average of 21 and that is even with only 69% pass accuracy. He can also go lost in some games reminiscing Mesut Ozil in that aspect.

As mentioned throughout this analysis, Marcus Thuram is a beast. At 6.3 feet and 88 kg’s, Thuram breaks the stereotypical image of wingers which is short and weak. Thuram uses his physicality to the maximum extent. Football analysis website smarter scout rates him as one of the highest in terms of aerial ability. This chart is just an example of that.

He also uses his body to fend off the defenders who are marking him. He is also key in Gladbach’s set-piece strategy. He also leads Bundesliga in terms of progressive runs.

This is the fifth season of the 22-year-old Frenchman, his career trajectory till now has been steady and by the looks of it expect it to continue because of his sensible decision to play in German team and grow as a player. As I mentioned above he should look to be involved in the game more and should not stop doing all the good things he is currently doing. I expect superclubs to keep an eye on him, I expect his value at 40-45 million euros where Gladbach make a lot of profit on their initial investment