Musa Barrow is a 21-year-old striker/left winger who signed for Bologna in January of last season on loan with an obligation to buy.  He joined from Atalanta after coming through their famed academy and had 3 years of only playing limited minutes, but the first 9 months of his time at Bologna has been an unbelievable success.  After his arrival in January, he hit the ground running scoring 9 times in the league, the most out of anyone in the Bologna squad in that time.

This incredible end to last season may not be maintainable with xG suggesting he should have only scored 5.9 goals which are not just a minor over performance but quite a major one.  This does worry me as I do expect to see a drop off in his goal numbers but even if he started to run level with xG he would be scoring at a rate of 0.39 goals per 90 which for a 21-year-old in a top 5 league is still very impressive.

When looking at a player you first have to understand the context of which they are playing in.  He is playing in a very competent side with an intelligent manager in Siniša Mihajlović,  according to xG they had the 11th best attack in the league and the 12th best defence and this is including half a season when Musa Barrow himself wasn’t playing and they have only improved since then.  They are a side who have a lot of talent and they have a very good blend of players with experience, players in their prime and young talented players like Musa Barrow.

They normally play in a 4-2-3-1 with the majority of their transitional play coming down the left sides with wingers cutting inside to attack the half-space creating space for both the striker to drift out wide or fullbacks to overlap.  Then they use their attacker’s natural ability to create chances with Orlasini and Barrow causing all sorts of trouble for every side in the serie a.  It is a team quite comparable to Mikel Arteta’s 4-2-3-1 at the start of his Arsenal career but I would say that Bologna plays a slightly more vertical style of transition.

In Bologna’s 4-2-3-1 Barrow normally takes up a position either on the left-wing or as the solo striker he then drifts inside when playing as a left-winger,  he drifts inside to attack the left side half-space with the left-back overlapping giving the fullback 2 men to cover and the centre back a hard decision to make.  When he plays upfront as a solo striker he tends to drift wide with the wingers coming inside once again looking to attack the half-space and he likes to get the ball to feet so that he can dribble, lay it off or shoot.  I think the role that he plays for Bologna is very comparable to that of Aubameyang and Martinelli in Arsenal’s system with both of them being strikers who are playing of the left.

He might not be as good a goal scorer as Aubameyang but he contributes to Bologna in another way this is shown by the fact that he is making just over 56 touches per 90 to put this in context comparing this to Martinelli and Aubameyang who are making 37 and 36 touches per 90 respectively and you might say that those are two players play further forward but if you compare him to Marcus Thuram whose roles is a little different as he tends to play a bit wider and deeper as this is a position that you would expect him to get the ball more you would expect him to make more touches per 90 yet he still only gets 44 touches per 90 12 less than Barrow’s 56 showing the importance of barrow to Bologna not only in the final third but in their overall play.  I believe that a large portion of this play has developed as a function of playing in the Atalanta academy and being managed by Gasperini,  this gives him a huge advantage compared to most other players his age

I think his shot location helps me to understand his role in the Bologna side; he likes to attack the left half-space whether or not he plays on the left.  This might be a personal preference or linked to Bologna’s style of play with their attack being slightly left-side dominant.  One other thing that you can see is that even though he is a striker you wouldn’t call him a poacher with only 2 of his 76 shots this season coming from inside the six-yard box this is because he tends to like to drop back in between the lines of the defence and the midfield in the so-called red zone.  To put this in context, compare him to another Bologna striker in Rodrigo Palacio who has taken 12 shots in the six-yard box and this is not due to taking a larger quantity of shots with him taking 60 which is 16 less than Barrow.  The areas that Barrow takes his shots means that the quality of his shots are lower with his xG per shot being just under 0.08 but taking these lower quality shots allows him to take a larger proportion of shots with him taking 4.32 shots per 90. 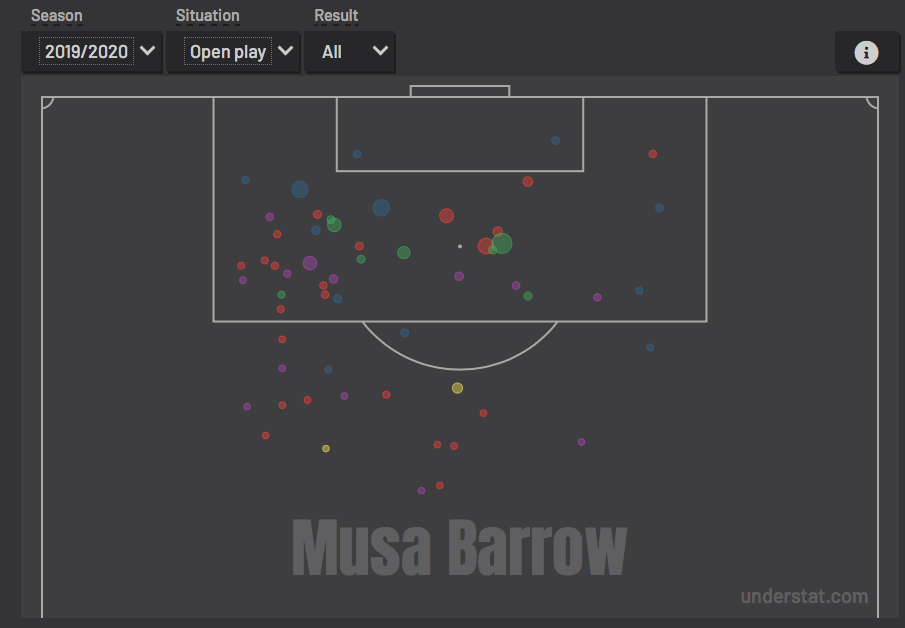 I think that you can clearly see Gasparini’s Atlanta’s tactical style clearly embedded in Barrow,  I think he is very easy to compare to Atalanta players like Zapata but he has slightly different skill sets being a much better dribbler than both of them with Barrow is attempting 4.5 dibbles per 90,  compare this to 2.6 dibbles per 90 that Zapata is attempting and Barrow is also completing a higher proportion of them completing a very impressive 63.2 per cent of his dribbles this is a decent amount more than Zapata’s 54.2% and these type of differences really matter when it comes to a couple of goal in the course of a season.

This heat map shows just how high he plays and yet he is still able to complete such a high percentage of his dribbles in a ‘defensive’ league like the serie a.  It isn’t only the fact that he completes a large portion of his dribbles, it is what he does with them he makes 173.4yards progressive yards.  This also comes with a lot of him dribbles coming around the edge of the box and this is shown to some extent by the fact that he has created 16 shots directly from one of his dribbles this is over 1 per 90, to put in context how actually incredible this is Jack Grealish widely known as one of the best dribblers in the premier league only managed to create 11 shots of his dribbles this means that Barrow has created 5 more shots from dribbles, oh and in 1881 fewer minutes this is more minutes then he played in the entire season.  He is also still able to complete that high proportion of his dribbles so far up the pitch which shows his quality on the ball.

As a creative player he adds a lot to his teammates this is a clear tactical blueprint from Siniša Mihajlović as the 5 players with the most xG per 90 they all average over 0.1 xA per 90 which shows that Siniša Mihajlović wants his forwards to not only score but create for each other.  To further prove my point the 5 players with the most xG are also the 5 players with the most xA.  This has clearly transferred to Musa Barrow with him averaging an xA of 0.21 per 90 this shows his clear ability not only to find space for himself but also for his teammates.  His creative numbers are helped by the fact that he takes corners,  but only 9 of his 81 shot creation actions have come from these dead ball positions.  Whereas you compare this to the fact that he completed 48 and 16 shot creation actions from open play and dribbles respectively this shows that he is not reliant on these dead ball scenarios to create. His creative numbers might be inflated because he plays in a side with multiple attacking threats and he has many options but he still has the quality to find these players.

One thing that is strange about him is the positions that you see him take up while Bologna are defending deep.  You see him show up in these defensive areas in the defensive third and it normally happens when Bologna are playing stronger sides. I distinctly remember it happening against Inter and Juventus.  This isn’t something that can nessicarraly be quantified as he only completes 1.3 tackles per 90 which aren’t particularly high but it is something that I noticed.  He is a very competent presser from the front; this is something that I imagine Gasperini had a huge effect on.  Bologna is not a side that press in huge amounts but Barrow still works hard while in the oppositions final third this is shown by the fact that he averages just under 20 pressures per 90 which isn’t very high but is solid especially considering he plays in a side who play a much more reactive press rather then a side who press consistently which for me shows that if you put him in a side who press consistently he would be able to make this change.

Musa Barrow is a player with a lot of physical ability, he is fast. This is something that is very hard to show with pure statistics as his top speed is not a reflection of his actual speed as the runs he makes are normally intelligent, and he doesn’t run in a straight line, but if you watch him his speed is very noticeable and it causes every defence real issues.  Whereas physical ability in the air can be shown much easier in numbers and in this sense he falls below expectations he competes for 1.9 aerial duels per 90 and wins 0.7 of them this is worse than it looks compared to most strikers because he has played off the left this puts him up against ‘weaker’ fullbacks and should win a higher proportion than the amount that he dose.    Earlier I said he ‘falls below expectations’ this is because he is quite tall at 6 foot and has a height advantage on most fullbacks which he plays against.  He is still young, and I expect him to grow physically so this is not something that worries me in any great deal

Prediction for the future

As for all young players, this season will be very important for Musa Barrow to develop but I would expect him to struggle especially at the start of the season.  This is due to the fact that he had an electrifying end to last season so teams will be more conscious of him and I expect to see a slight downturn in his finishing.  This has nothing to do with his ability but a very normal thing to happen to younger strikers when they have a good run of finishing as he did in the back half of last season.  Also, a result of him being marked more tightly this will have a positive effect on Bologna as it will give other players like Orsalini more space which simply cannot be a bad thing and then when Orsalini has a good run the same thing will happen again but to Orsalini being marked tighter and this will then allow Musa to have more space which i am sure he will take full advantage of.