Who/what is a defensive midfielder?

A revaluation of the concept of the defensive midfielder is a necessary outcome of the modern changes occurring in the world of football, an evolution that is redefining certain concepts and ideas, discarding others in the meantime and giving birth to new ones or even recycling old and forgotten ideas

In this piece, I’m going to explain how defensive mid’s differ in every other team.

1.Casemiro- the box to box midfielder

Carlos Henrique Casimiro or generally called Casemiro is considered as one of the best defensive midfielders in the world. He is a shrewd defender who occasionally pops up with a goal or two. He is extremely fast and covers the field. 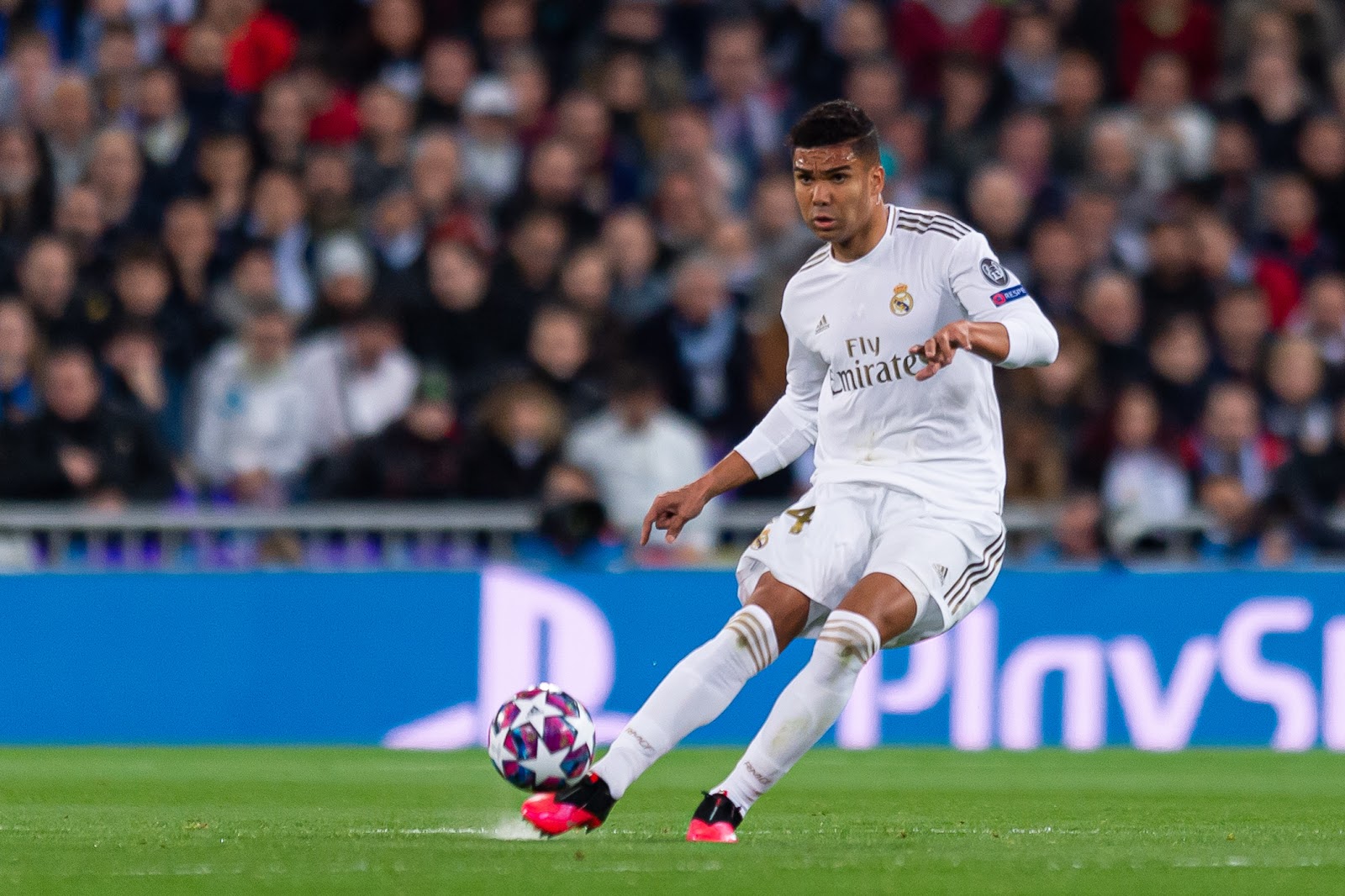 Casemiro acts as a link between the real Madrid defence and attack. his defensive actions are one of the best in the league with 5.4 tackles and interceptions and 3.4 fouls committed. He commits fouls cleverly and hardly receives a card. In defence, the Brazilian either acts as a shield for the Los Blancos defence. In possession, he drops deep to form a back 3(image 1) or switches position with Kroos(image 2) both of them are helpful in ball progression.

Casemiro acts as a box to box midfielder in most circumstances and his role in the real Madrid press is vital, he leads from the front and commits foul in case of a counter-attack. Like for instances in image 3, despite him playing as the deepest midfielder, he came up to press in the opposition’s box.

To conclude Casimiro is a beast who’ll cover his teammates. He is also helped by the small pitch of Santiago barnebau. He is also a master reader of the game, he can sometimes fade in possession but mostly when he gets the ball he’ll rotate it, he passes the ball 61 times per game with  85% success rate and more importantly, he will not give the ball away for that he shields the ball and gets fouled. His 1.5 fouls won is a testament to that. His heat maps show us how he covers the entire field. This is his heat map against Sevilla.

Pep once referred to kimmich as a “ Swiss Army knife of a player- good in every problem”. Taking inspiration from this quote, I’ve followed the progression of him back into midfield amidst Bayern’s injury crisis. 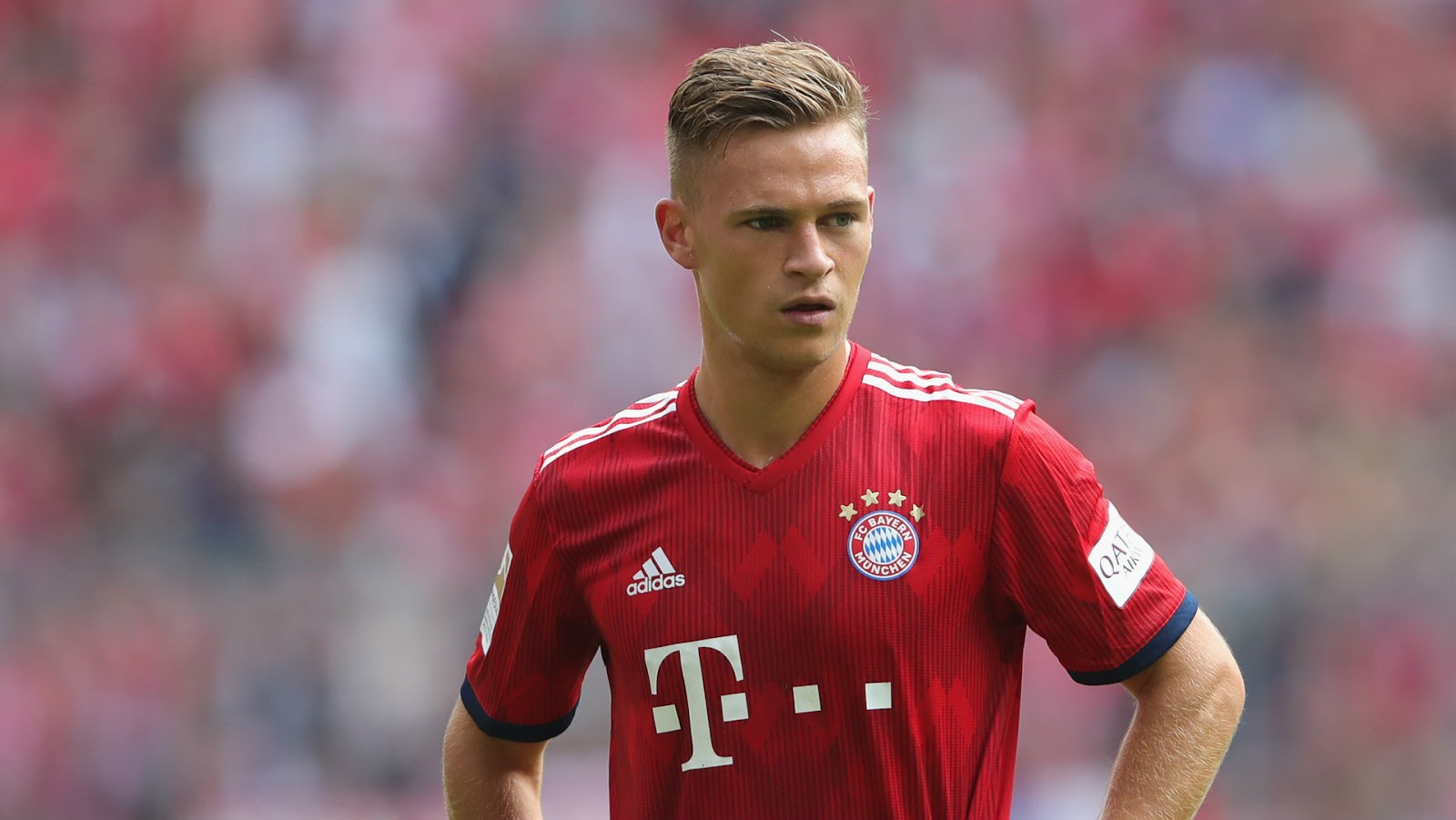 Joshua kimmich has played a lot of roles in this amazing Bayern team. He has primarily played in a double pivot with Thiago in a 4-2-3-1. The midfield they form is very fluid, they constantly move from one side of the field to others. Kimmich has one of the best footballing brains, he could find space between 5 players and not lose the ball, image 6 is one of the examples. Here 5 players are pressing him, but he finds a pass to the right-back(pavard) which results in a counter-attack. 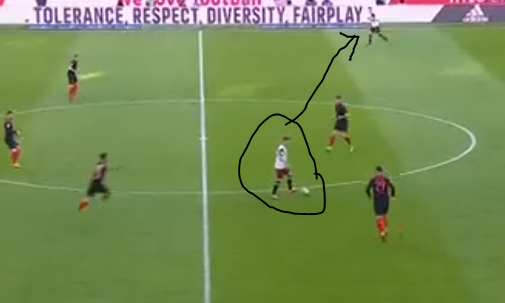 Along with the amazing ability, he posses, he has also never given up and always gives a fight to the opponent. Kimmich clocks up 2.4 tackles and interceptions, which might not seem a lot when compared to a Casimiro, but Bayern average the most possession (63.3)in Europe, which ultimately means that he does not have a lot of opportunities to win the ball back. Kimmich is also a set-piece specialist and has a Kevin De Bruyne likeability while crossing. The high possession game of Bayern help him in some ways like he has the ball more often which results in him completing more passes- currently, he attempts 78 passes with 90 % success rate, he also completes 5.6 long balls per 90. His passes also rank as one of the highest penetrative passes in Europe. This chart shows just that- 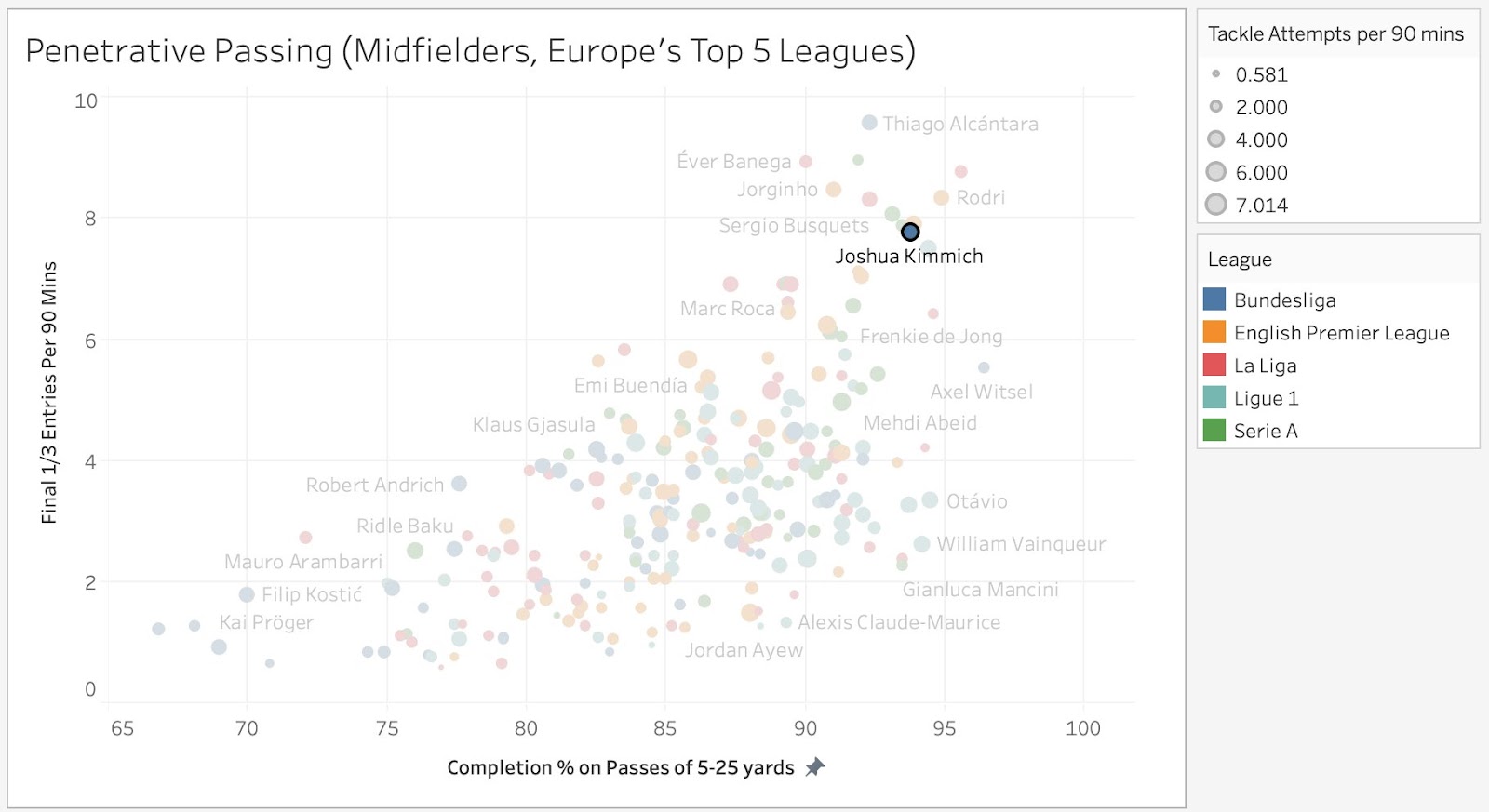 It can also be observed that Kimmich drifts to the right-wing when he plays in a double pivot. This heat map against Chelsea is proof of that. 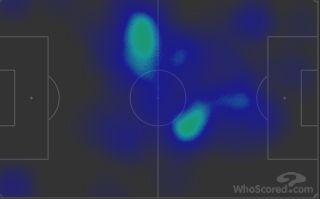 When he plays as a pivot in 4-3-3 he usually stays deep and forms a passing triangle with centre backs. This enables the full-backs to move up the pitch, this is quite helpful considering Bayern have very explosive full-backs like Alphonso Davies who are very explosive in the attack.

To conclude Kimmich has been exceptional this season, he has also featured at right-back and centre back once in a while.

Jorge Luiz Frello Filho, best known as Jorginho is the vice-captain of Chelsea, he plays in the position so-called as “Regista”. He was bought by Maurizio Sarri to be the centrepiece of his Chelsea team, but Sarri has left now and Frank Lampard has joined the team but his role has not changed.

Regista in Italian means ‘director.’ It actually means the one who directs, who dictates the offensive play of the team. A regista is not the one who would run around the pitch vying for the ball, but it’s someone who would start his move by lying deep in his own half just in front of the centre-backs and finding his teammates with balls that would be difficult to spot even on a TV screen. Such is the elegance of the regista.

Jorghinio has played mostly as a regista this season. He can always be seen directing the play in possession, sometimes even telling captain Azpi to move. Jorghinio also helps in the defensive game, he puts up 4.4. Tackles and interceptions which are quite solid but Jorghinio lacks speed so if he has to defend against a fast player he will struggle and pick up a yellow.

Jorghinio has played in a double pivot where he plays the deepest and forms unique passing squares with back 3. These squares help in Chelsea moving up the field without losing the ball, the next image is the example of that.

Jorghinio’s main ability is his passing, he reads other player’s mind and knows their movement. Jorghinio often plays line-breaking passes which are lethal. These passes mostly are chips which take out 3 or 4 opponent player, take the next image for example where he takes out 3 Newcastle players at once, this results in an above-average attack. (above 0.5 xg)

Jorginho like Kimmich is also one of the best penetrative passers in Europe this chart shows just that. 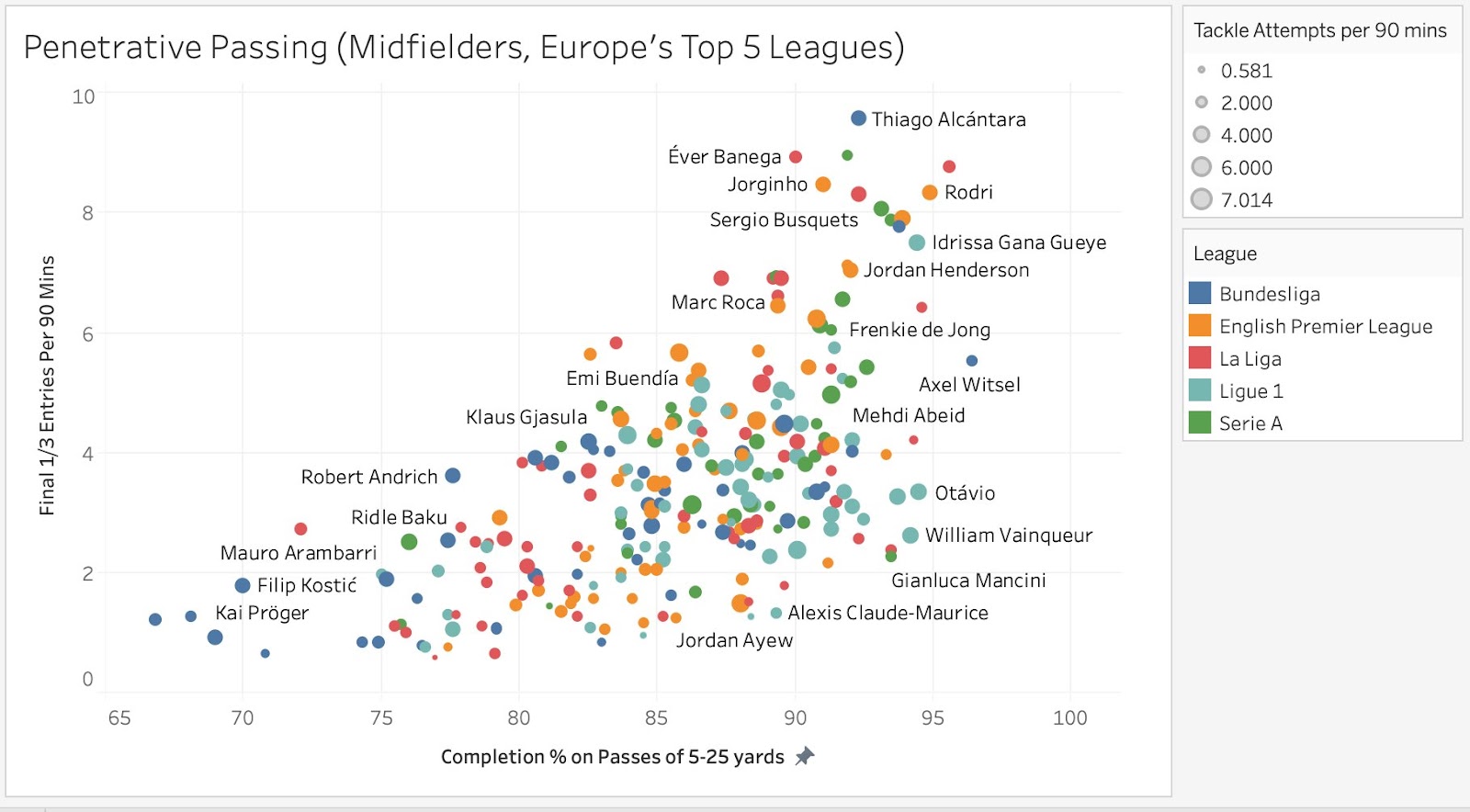 To conclude Jorghinio is one of the best midfielders in the prem and Chelsea play according to his strengths so his full potential is utilised.

Other regista include- Andrea Pirlo, Mirlem Pjanic and Xabi Alonso

Onyinye Wilfred Ndidi is a Nigerian professional footballer who plays for Premier League club Leicester City and the Nigeria national team as a defensive midfielder. 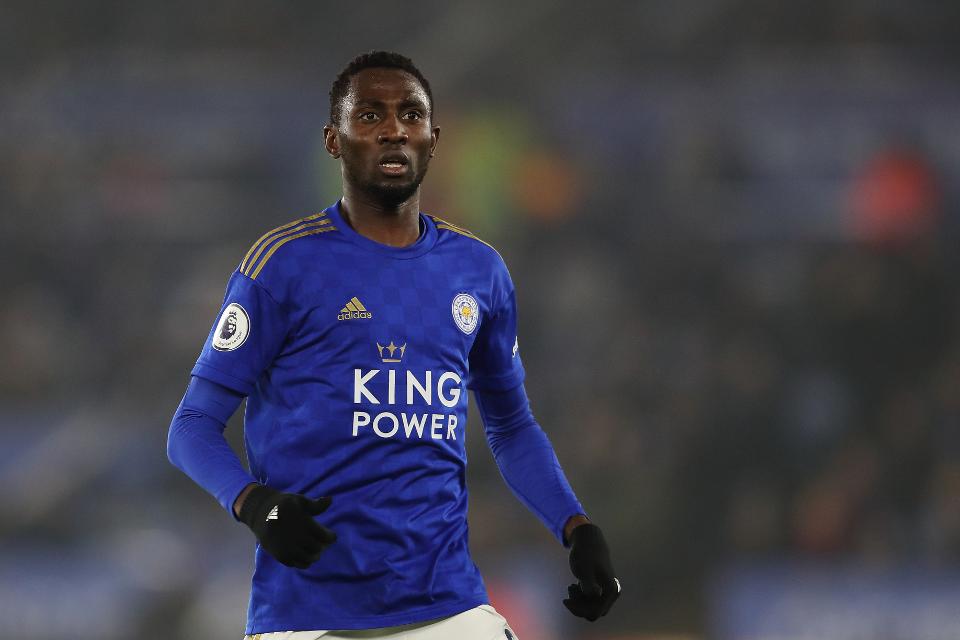 Leicester city’s Ndidi has been one of the best Europe’s under 23 defensive midfielders. He

generally plays along with two midfielders, generally any 2 of Chaudry, Paret, Tielemans, Maddison. He has a similar role whoever he plays with, he acts as a destroyer. Unlike, Casemiro, He does not press a lot, he sits and anchors the midfield. This next heat map is an example of that. 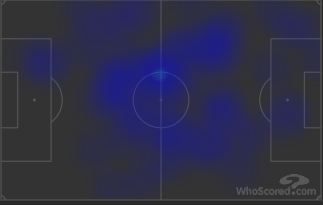 I’m sure most people who read this are aware of the Nigerian’s defensive work, which is immense. Just to nerd out a bit, his stats are as follows- he completes 4 tackles and 2.7 interceptions, along with that he also commits 1.5 fouls. Ndidi is super athletic and was missed by the Foxes when he was injured.

Ndidi’s role in Brendon Rodger’s side is limited. Generally, they either build-up from full-backs progressing the ball or one of the centre back play it long. However, when called upon Ndidi does fine, his main work is to switch play or rotate play with other attacking players. Like in the following image he receives the ball from the left-back James Justin and switches it by playing it to the right-back Ricardo. These types of passes might not be noticed by everyone but are integral for Leicester. This is how he clocks up 50 passes per game with a respectable 84% accuracy.

To conclude Nidid has a lot of qualities of a great player but he can improve in certain areas of his games like Dribbling and passing.

Thanks for reading my blog, I hope you liked it, please write your review.